Setting a new standard for commercial offices in kenya

What is the sealing technology of China unitised curtain wall?

The horizontal sliding structure of China unitised curtain wall is to set sealing plates on the upper frame of two adjacent unit modules on the left and right. The sealing plate is used to block the openings that penetrate the upper, lower, left, and right 4 unit modules. In addition to the sealing function, this sealing plate also has a water collection tank and a partition (separating the mullion into a unit on each floor). Since the sealing plate is embedded in the sliding groove of the upper frame of the unit assembly, it is larger than the male groove of the lower frame of the upper unit, and the lower frame of the upper unit can slide freely in the groove of the unit assembly sealing plate. It does not restrict the lower frame of the upper unit to two adjacent lower frames. The unit assembly slides in the upper frame. Under the action of an earthquake, when the main structure is displaced between floors, the original upper, lower, and one aligned two unit components, under the influence of the displacement of the main structure, the upper and lower unit components undergo relative displacement. At this time, the upper unit assembly is no longer located in the originally aligned upper frame of the lower unit assembly, but may partially slide into the upper frame of the adjacent lower unit assembly. Due to this sliding, during an earthquake, the unit assembly itself deforms more in the plane than the main body. The displacement between the structural layers is small. In the past, some foreigners moved from pseudo-static tests (the left and right regular displacements and the movement of the element members were in the same direction during the pseudo-static test). However, during the earthquake, the unit curtain wall not only moves in the same direction in the pseudo-static test, but also moves randomly. In 1994, Tongji University used the shaking table method to conduct seismic tests on the unit curtain wall and found that the in-plane displacement of the unit curtain wall was random. (It is not a regular movement in the same direction), that is, it moves in the same direction at the beginning of the earthquake, and then there will be different movements, namely reverse movement and backward movement. When moving in the opposite direction, joints of two adjacent units may appear.

When moving backward, the joints of two adjacent units are opened. Due to the influence of the 3D seismic action, the steel bars will be dislocated and collide when they are restored after being opened. Therefore, the "Technical Regulations for Steel Structures of High-Rise Civil Buildings"-Article 98 stipulates that the design of the connection between the curtain wall and the main structure should consider the issue of collision avoidance. Therefore, when designing the left and right joints of the unit members, the overlap amount should be 1mm larger than the expected displacement to prevent the two unit members from colliding. In October 2010, in the seismic test of the back bolt connecting the stone curtain wall by the Institute of Building Structure of the Chinese Academy of Building Research, the bolt joint began to slide during the earthquake, and the slip and collision of the stone slabs were obviously visible (no glue was injected between the joints). The seam of the stone panel is required to be 1mm larger than the calculated result to prevent collision.

For more product information about YouTube of China unitised curtain wall, you can click on the relevant link below. 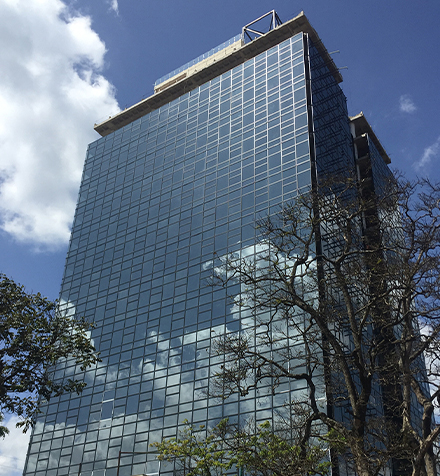